It is difficult to come across someone who has not heard of the Ice Age, both the period of time on Earth millions of years ago, as well as the block-buster film that follows a woolly mammoth and his animal companions on their journey to escape the upcoming freeze. While the film resulted in a happy ending, the truth of what happened to Earthâs woolly mammoths is less light-hearted. Centuries ago, the woolly mammoth species faced its extinction, eventually, scientists developed the theory that the cause of this extinction was due to unfavorable extremities in climate and weather that caused the isolation and eventual decease of the woolly mammoths. Though this theory is not incorrect, it should be noted that another crucial reason for the wipeout of these animals was due to a plague of harmful genetic mutations.

Near the end of the environmental calamity of the Ice Age, the last remaining numbers of woolly mammoths had acquired such a large amount of genetic mutations that their extinction was almost certain to be in the near future. The vast majority of the woolly mammoths died during the end of the last Ice Age, however due to rising sea levels, a group of mammoths became trapped on an island known as Wrangel Island, and remained here as they waited for death. With nowhere to go and having such a small population size, the mammoths resorted to breeding amongst themselves, but without genetic diversity, or the total number of genetic characteristics in the genetic makeup of a species, the mammoths accumulated harmful genetic mutations and could only pass them around amongst themselves. A genetic mutation, or a gene variant, is a permanent change in the DNA sequence that makes up a gene, and can oftentimes cause harmful diseases to amass in an organism. 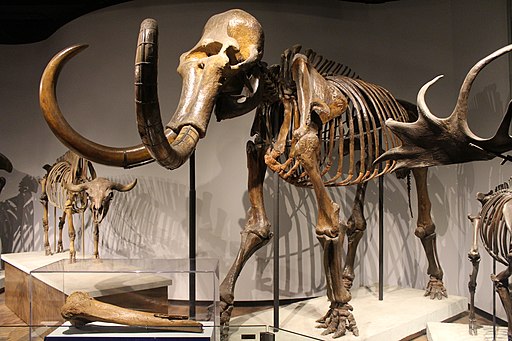 Recently, in order to further investigate the woolly mammoth genetic doom, an experiment was performed by researchers from the University of California, Berkely, in order to compare the existing genomes of two different mammoth specimens. Using DNA from a Wrangel Island mammoth, and DNA of a much older mammoth found in northeastern Siberia, the scientists found that the Wrangel Island mammoth DNA was littered with harmful mutations that would have interfered with normal functions and compounded the difficulties of survival. Researchers Rogers and Slatkin were able to assume that the animals most likely faced the loss of many olfactory receptors that detect odors, as well as urinary proteins. They hypothesized that the loss of these genes also impacted the eliciting of mating behaviors and signalling of social status, as they are utilized in modern elephants. Other mutations were found in the genes involved in neurological development, male fertility, and insulin signaling, the researchers found that many of the woolly mammothâs genes did not carry out their tasks correctly, leaving the last woolly mammoths in jeopardy of extinction.

It would be expected that once a harmful genetic mutation appeared in a population, the process of natural selection would be efficient in removing mutated individuals from such a population. However, findings suggest that in the case of the Wrangel Island mammoths, their small population and resulting inbreeding rendered the process of natural selection ineffective. As stated in past units of AP Biology, natural selection is the process by which organisms that are better adapted to their environment tend to survive to produce more offspring, and is also known as âsurvival of the fittest.â During their time, the presence of any surviving mammoth was better than no mammoth at all, so natural selection did not operate in the usual way. In larger populations, mutations are naturally weeded out by competition, however since the woolly mammoths were such a small remaining population, there was no mechanism for the prevention of these mutations being passed onto future generations, causing these mutations to delete large chunks of DNA and mess up how genes were read and translated forever in the mammoths, being known by present-day researchers as a âgenetic meltdown.â

Although, the extinction of the woolly mammoth cannot be blamed solely on genetic disease, a warming climate also led to the eventual perish of the very last of the woolly mammoths. As it was recently discovered, long after the death of most of their kind, one group of woolly mammoths was still surviving on an Alaskan island, facing dehydration from the evaporation of the only lakes they had access to. To explore the mystery, Russell Graham at Pennsylvania State University gathered three lines of evidence that supported their belief that the woolly mammoths simply ran out of water. The first was radiocarbon dating of mammoth bones, collecting mammoth DNA from cores of sediment at the bottom of a lake and dating the sediment layers provided the second. The final piece of evidence was the fact that a certain type of fungi that was present at the same time as the last woolly mammoths only grew in the excrement of large mammals, when the woolly mammoths disappeared, so did the fungi. Steadily evaporating fresh water also factored into the dehydration and eventual extinction of the mammoth population. Combined with their catastrophic genetic sequence, climate change and human hunting meant that the very last woolly mammoths were doomed from the start.

Extinct species like the woolly mammoth offer incredible insight into Earthâs past, and provide more and more information on the evolution of this world. As this class has been studying, genetic mutation and natural selection play vital roles in the evolution of species, and in woolly mammoths, fossil specimens can be used to track the genomic diversity and genomic composition of the Wrangel Island mammoths to the time of their final extinction. The extinction of the woolly mammoth is a real life example of multiple topics discussed in AP Biology, from the broad subject of evolution to the idea of genetic drift, or random fluctuations in the numbers of gene variants in a population, as was seen in the woolly mammoths, where multiple genes disappeared over time as mutations set in. To this day scientists marvel over the phenomena of the past, and the topic of the woolly mammoths, so much so that there is discussion of the revival of the ancient species. The idea, however, is not impossible, as woolly mammoth cells have been brought back to life in a shocking scientific discovery. In conclusion, the evolution and extinction of species are constant processes, some that the Earth has been housing for billions of years, and the woolly mammoth is just one species to face sudden hardship in survival, caused by genetic mutations, a warming climate, and the lack of natural selection to even the playing field.

This entry was written by Sommer H. and tagged Bio-Blogging, Mammal Monday. Bookmark the permalink.