Extinction has occured since life first evolved, but the high rate at which it is occurring now is causing great concern. Human activities have created a biological diversity crisis on Earth. There are three levels of biodiversity including genetic, species, and ecosystem diversity. Genetic diversity consists of individual genetic variation in a population and between populations that is related to adaptations to local conditions. Species diversity is what most people focus on when discussing the biodiversity crisis. Species diversity is the variety of species in an ecosystem that decreases from extinction. It is important to note that extinction ranges from local to global. Global extinction means that the specific species has been lost from every ecosystem it had lived in. Furthermore, ecosystem diversity is the variety of the biosphereâs ecosystems. As interactions happen between populations of different species in an ecosystem, the local extinction of one species can negatively impact another species in the ecosystem.

A decrease in biodiversity should be alarming to humans because with diversity comes benefits. Many species that are threatened or endangered could possibly provide medicines, food, and fibers for humans to use. Every species lost means we also lose their unique genes that could potentially code for valuable proteins. Additionally, ecosystems purify our air and water, decompose our wastes, and reduce the effects of extreme weather. The organisms in these ecosystems pollinate our crops, control pests, and create our soils. As humans contribute to the loss of biodiversity we are simultaneously reducing the ability of ecosystems to cary out processes that are necessary for us to survive. 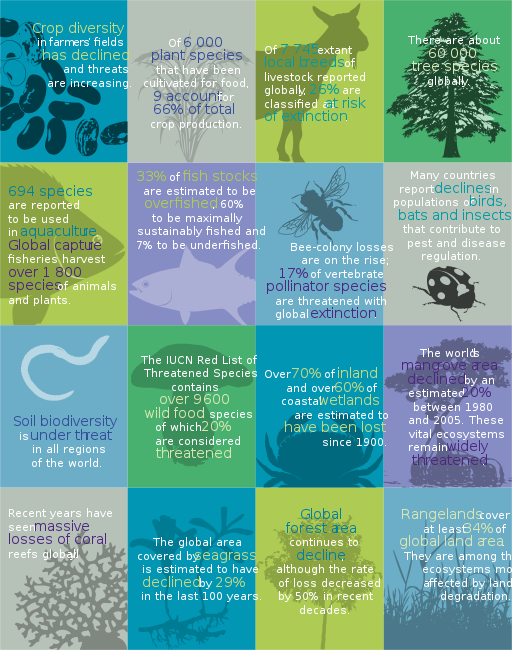 The threats to biodiversity caused by human activities fall under four main categories: habitat loss, introduced species, overharvesting, and global change. The greatest threat to biodiversity is humans altering habitats. Habitat loss occurs due to urban development, agriculture, forestry, mining, and pollution. Habitat loss results in extinction if there is no other habitat option available or if a species cannot move. The IUCN holds destruction of habitat responsible for 73% of the species that have become extinct, endangered, vulnerable, or rare in the last few hundred centuries. Introduced species, or exotic species, are those that humans move on purpose or on accident from their native locations to new regions. These species contribute to 40% of the extinctions recorded since 1750 and cost billions of dollars each year in damage and control efforts. There are more than 50,000 introduced species in the United States alone. Thirdly, overharvesting is the harvesting of wild organisms at rates that exceed the ability of their populations to rebound. Lastly, global change alters the fabric of Earthâs ecosystems at regional and global scales. These changes include alterations in climate, atmospheric chemistry, and ecological systems that limit Earthâs capacity to sustain life. An example of a global change would be acid precipitation.

While resurrecting species now seems possible through biotechnology, we still must preserve the species on Earth. Preservation is what humans should strive to achieve, as it is ethical and important scientifically considering the issue of genetic diversity.

This entry was written by Sophia M. and tagged Bio-Blogging. Bookmark the permalink.