Ancient Volcanoes Once Boosted Ocean Carbon, But Humans Are Now Far Outpacing Them 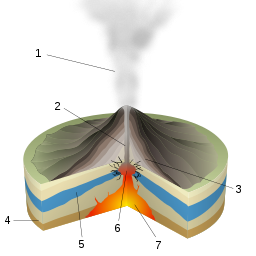 Imagine yourself as a sea creature 55 million years ago, when there was no human race and all you worried about was the bigger predators swimming around you. Unfortunately that was wrong, about most sea creatures during this time period called Paleocene-Eocene Thermal Maximum (PETM) also had to worry about some pretty bad emission gases. Researchers have always been aware of these big deposits of gas at this time but have never been able to confidently say what the source was. Researchers at Columbia Universityâs Lamont-Doherty Earth Observatory have finally understood that these massive emissions were coming from volcanic eruptions.

When volcanoes erupt they emit large amounts of carbon dioxide, which at this prehistoric time was the only massive deposits of carbon dioxide going into the atmosphere and sea. The combustion of surrounding sedimentary rocks, and methane welling up from the depths also contributes to the emissions getting released straight from the eruption. When carbon emissions get released, the main and most important contributor to absorbing the gas is the vast ocean. Atmospheric levels would be ridiculously high if the ocean did not absorb so much carbon emissions. When the ocean absorbed all these gases 55 million years ago, it turned the ocean very acidic. To the point where countless numbers of ocean species became extinct because of the unlivable conditions. Multiple evidence shows that this process killed off deep-sea life and other crucial marine life.

Although, this is not even the very last of the world’s problems. Fast forward to present day earth, hustling and bustling with billions of people. New evidence shows that the human race is emitting carbon emissions 3 to 8 times faster than when the volcanoes did back in the PETM time period. You may think we have dont this over large amounts of time, but studies show doing this over decades rather than millennia. The key importance of this problem comes with the fact that we as a race are drastically shooting the rates at which we put carbon dioxide into the atmosphere, which causes the oceans to absorb more and more emissions. The levels in the atmosphere have risen from 280 parts per million in the 1700âs to roughly 415 parts per million in recent years. Once again this comes with even more side effects as the ocean was not meant to absorb so much carbon emissions/greenhouse gases that it is turning highly adic once again. This creates a domino effect that causes marine and ocean life to become stress and inhabitable, just like in prehistoric times. With living things, introducing carbon extremely fast is terrible as if you slowly release it gives time for all living things to adapt and overcome.

This worldly problem should be a top concern, as it needs to be respectfully observed and understood. With these present day deposits of carbon emissions, the climate is rapidly changing, global warming is a crucial issue as heat continues to get trapped and the ice caps continue to melt. Time is not on our side when it comes to the problem and I believe awareness on the global topic is not where it should be right now. Respiratory disease, air pollution, extreme weather, food supply disruptions and other issues will only get worse if the world does not get on the same page about the topic. A great example of this is the west coast wildfires currently. If anyone is curious or does not understand why these extreme wildfires are breaking out all of the west coast, it is because of the effects of global warming and extreme climate change. This honestly is a terrible thing but could be a wake up call or an early warning of what will happen if we as a human race do not start working as one to fix this issue and start trying to slow this process down.