Evolution is a controversial topic in this day in age, due to different beliefs about how us humans have evolved. One example of evolution scientists study are vestigial structures, which are organs, muscles, and cells that serve almost little to no purpose in the body of species. They are caused due to a change in environment and natural selection of a species in the past. Vestigial structures include wisdom teeth, the appendix, and the attainment of goosebumps. The ideology of possessing vestigial structures showcase the belief that the process of evolution is not a chain, but a tree; and that all species that share DNA all share the exact same ancestor. An easy depiction of similar ancestors between species would be a human and a chimpanzee. But what if it was revealed that humans and fish could be related? What about humans and reptiles? Possibly dinosaurs? Let me explain.

Imagine this: itâs dark out and youâre in the middle of the jungle. You hear a huge thud that shakes the ground and hide. As you hide behind a large rock, you see a large figure approach you. As it bends down to look, you see the eye of a T-Rex. It blinks from side to side at you and youâre taken aback by this. This Jurassic Park scenario, although added as a fear factor, is most likely accurate to the species of the Jurassic age. Many paleontologists and biologists have hypothesized that dinosaur blinks are due to what is called a nictitating membrane; when instead of the eye blinking up and down (like a human), the eyeball blinks side to side. Known as a âthird eyelid,â a nictitating membrane (plica semilunaris) is present in birds, reptiles, amphibians, fish and in very few mammals; it is used to clear debris or any other bacteria from the eye. This mechanism is very similar as a windshield wiper. Although nictitating membranes cannot be fossilized, it has been scientifically proven that many birds, reptiles, amphibians, and certain breeds of fish have been connected as descendants to dinosaurs. 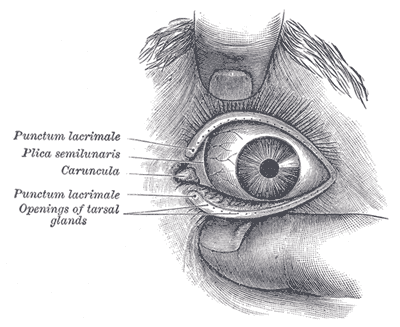 How does this membrane affect and relate to humans? Humans have what is called the caruncula lacrimalis (descendant of plica semilunaris), which is the pink lump located in both of the inner corners of our eyes. Within this structure, scientists have found that there are many remnants of a nictitating membrane. The remnants of muscle and tissue that are found in species with a nictitating membrane are folded and packed away into our inner corner (conjunctiva), and therefore serve no purpose to us now. Many scientists have found that the plica semilunaris in some indigenous African and Austrailian people are slightly larger and expansive that other people around the world. This vestigial structure in humans is still in use to many other species, which supports the theory all species are interrelated in some way.

It is crazy to think that if our eyes never evolved, we could be blinking from side to side, instead of up and down. So whenever you blink (or remember to check), think about all the way humans have evolved, who we share common ancestors with, and how we could potentially change and evolve in the future.

This entry was written by Maddie O. and tagged Bio-Blogging. Bookmark the permalink.