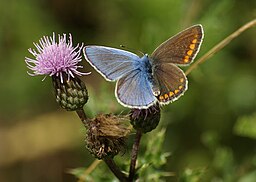 You may have seen an odd bird flying around your neighborhood or a strange butterfly sitting on a flower. The animal might have been two different colors split right down the middle. One half of the animal perhaps was bigger than the other. It may have just not looked like the other animals. This could be because it is a gynandromorph. As we learned earlier in the year a gynandromorph is an animal that is half male and half female. The animal is split right down the middle. Every cell on each side of the animal is either wholly female or wholly male. Not to be confused with a hermaphrodite. A hermaphrodite is an animal that has both sets of genitalia, but the gender crossing ends there.

This phenomenon occurs during the anaphase stage of cell division in an embryo. As the DNA is pulled apart mutations allow for the female XX chromosome pair and the male XY chromosomes pair to be pulled to opposite poles. This mistake could be the result of one of two possibilities. The first is nondisjunction. In nondisjunction an abnormal number of chromosomes goes to each daughter cell. For example, one cell may receive three chromosomes and the other receives one. This results in a mutation. The second possibility is chromosome loss. In this situation during the process of mitosis a chromosome is not passed to either daughter cell. It is simply lost in the process. This also creates a mutation in the cell. Both of these mutations create aneuploid cells. An aneuploid cell is a cell with an abnormal number of chromosomes. When the cell divides it results in a male and a female cell in the same organism. These cells continue to divide, creating more male and female cells. This phenomenon is not possible in humans because the first bodily structures to develop in a human embryo is the mouth in the rectum. This makes the vertical split of gender impossible. It is much more common in species of butterflies and birds that develop in a manner that allows for the vertical split.

Gynandromorphs are extremely rare in nature. One of the species they are most common in is birds. Even so, they only occur in about one of every one million bird. The rare combination while intriguing to the eye presents many challenges for the animal. One of these is the inability to reproduce in many situations. In most situations the organism does not have a full set of either reproductive organs and simply has partial sets of both reproductive organisms. Gynandromorphs also normally do not participate in mating practices. For example, a bird suffering from this condition did not perform the mating call typical of its species. This same bird was almost completely isolated from its species. These are just a few of the challenges a gynandromorph faces in nature. Gynandromorphs are very valuable to collectors and for this reason are even rarer in nature. So next time you are lucky enough to see a gynandromorph, enjoy its beauty and let it be.

This entry was written by Jackson R. and tagged Bio-Blogging, Winged Wednesday. Bookmark the permalink.