If you could cure anything in the world right now, what would it be? Coronavirus, perhaps? Cancer? The answer I would give is diabetes. You might be thinking, âAre you serious? But canât diabetics just get better by exercising and eating healthy?â Well, not exactly. And maybe you arenât thinking that, but youâre silently judging me, whether intentionally or not, because of all the things I could cure… diabetes? Yep. Now I may be a bit biased on my decision, seeing that I am a diabetic myself, and perhaps this makes me a little bit selfish. But hereâs the reality: over 32 million Americans are plagued with this disease. Only about 5% of these cases, however, are type 1 diabetes, my own included.

In diabetes, the body is unable to produce or effectively use its own insulin, resulting in a buildup of sugar in the blood. Type 1 diabetes (T1D) is caused by the immune system attacking the insulin-producing beta cells in the pancreas, keeping the body from maintaining proper blood glucose levels. The only current treatment for type 1 is self-administering insulin whenever carbohydrates are consumed through multiple daily injections from an insulin pen or insulin pump therapy. However, scientists are researching new ways to further develop more effective treatment methods and a potential cure – one of which is beta cell regeneration. 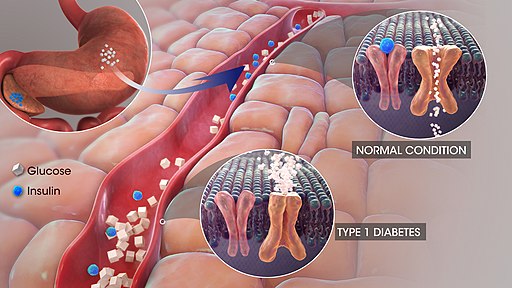 Within the pancreas, there are about one million Islets of Langerhans, which are groups of different types of cells. Each islet is composed of alpha, beta, and delta cells, which are hormone-producing cells, as well as C cells, which have no known function. As mentioned before, diabetes is caused by the destruction of the beta cells within the islets. Beta cells are what produce the hormone insulin, which is vital to maintaining healthy blood glucose levels. Type 1 diabetics have 70-97% fewer beta cells than someone without diabetes, causing the amount of sugar in their blood to be much higher without manual treatment. Unlike many other cells, beta cells are largely unable to grow back once destroyed. The challenge faced by scientists and researchers is finding cells that can be transformed into beta cells and replace those lost with T1D so the body can once again create its own insulin. Alpha cells and stem cells are two potential candidates for beta cell regeneration in the pancreas.

Alpha cells are essentially the opposite of beta cells and produce the hormone glucagon, which releases glucose from the liver and fat tissue. These cells are not affected by type 1, so they are abundant within the pancreas alongside beta cells, and reducing alpha cell levels has no known negative effects on glucose metabolism. In a study completed in 2018, scientists utilized an adeno-associated virus to infuse the transcription factors Pdx1 and MafA into diabetic mice. The result was a transformation of some alpha cells into beta cells that were temporarily able to produce insulin. While it is still unsure if this process would do the same with human cells or if it would be possible to prolong the production of insulin from the new beta cells, this research provides a glimpse of the potential alpha cells have in beta cell regeneration.

The other method involves stem cells, which are unspecialized cells throughout the body that have the potential to become specialized cells, and they function as a repair system within the body that provides replacements for damaged cells. In 2014, Dr. Timothy Keiffer and a team of scientists were successfully able to differentiate stem cells into beta cells that were able to produce insulin after transplantation. In other research, scientists were able to determine the exact location of progenitor cells within the pancreas that are able to develop into beta cells. Progenitor cells are descendents of stem cells, and behave in similar ways. These pancreatic progenitor cells were found to differentiate into insulin-producing beta cells when stimulated by a naturally occurring growth factor known as bone morphogenic protein 7, or BMP-7. However, because type 1 diabetes is an autoimmune disease, the difficulties following these discoveries lie in preventing the immune system from attacking the newly formed or implanted beta cells.

The research performed with alpha and stem cells shows immense progress in the development of a cure for type 1 diabetes, and while there is still quite a ways to go, the current discoveries provide a great deal of hope for my future and the future of millions of other diabetics around the world.

This entry was written by Cydney W. and tagged Bio-Blogging. Bookmark the permalink.