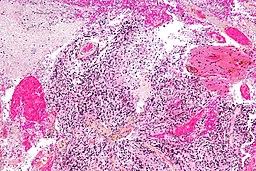 Intermediate magnification micrograph of a glioblastoma
Image from Wikimedia Commons

Cancer has been a focus of scientists and doctors alike for decades. Through research, experiments, and trials, many monumental discoveries have been unearthed, revolutionizing treatment and recovery for cancer patients. However, a universal cure for cancer has yet to be discovered, as cancer exists in many different forms and can rapidly change within a single person. The yearning for a breakthrough continues to fuel research pursuits, many of which yield promising results that enhance the current understanding of cancer in the human body.

Recently, a team of cancer scientists at the Vagelos College of Physicians and Surgeons and the Herbert Irving Comprehensive Cancer Center of Columbia University found that nearly 20% of glioblastomas are powered by overactive mitochondria.

Glioblastomas impact the cells that surround neurons, known as glial cells. The tumors themselves are often undefined, with irregular edges that seep into nearby regions of the brain. Surgery, therefore, cannot ensure that every cancer cell is removed. Glioblastomas also have the tendency to spread quickly. The regulatory checkpoints of the cell cycle in cancer cells differ from those of healthy cells. Cancer cells continue to divide, even when there is no need for additional cells, which leads to tumor formation in the first place. Cancer cells may also lack anchorage dependence, meaning they are capable of growing apart from the original tumor. Glioblastomas are able to metastasize and invade other areas of the body. The undefined shape and absence of inhibition of glioblastomas, along with their ability to spread from the original site in the brain, makes them particularly difficult to treat and contribute to scientistsâ focus on finding solutions with more promising outlooks than those currently offered.

Glioblastomas are one of the most aggressive forms of brain cancer – the average survival is a mere 15 months. There are four different classifications of the glioblastoma, one of which is the mitochondrial tumors that were focused on during this study. The findings of the cancer scientists would not exist without the recent process in single-cell analyses. These gave the scientists the ability to understand the biological activities of cells from a single tumor, cell by cell. Valuable data was obtained from each cell regarding the cellâs genetic mutations and gene activity levels, in addition to other genome modifications. This approach contrasts the more common approach of recognizing gene signatures but allowed the researchers to get a better picture of the biological processes and pathways that sustain the cells. The researchers found that the majority of tumors consist of cells from one of the subtypes of glioblastomas, with some cells from the other three types. Classifying the types of tumors helps scientists determine the best way to approach treatment. Because researchers now know that 20% of glioblastomas are powered by overactive mitochondria, scientists can tailor treatments to resolve their overactivity.

Similar techniques are being applied to other forms of aggressive cancers. In identifying the biological processes and pathways, researchers believe that this new approach reveals common pathways between different cancer types. Thus, drugs able to treat mitochondrial brain cancer may be able to treat other forms of mitochondrial cancer. The study also found success with drugs currently in clinical trials. Mitochondria-inhibiting drugs had a strong anti-tumor impact on brain cancer cells possessing overactive mitochondria, which provides hope for the future. The success of the study at Columbia University is just the beginning of many more revolutionary findings that will impact millions of lives across the world.

This entry was written by Abby H. and tagged Bio-Blogging. Bookmark the permalink.