Does It Really Suck to Suck? 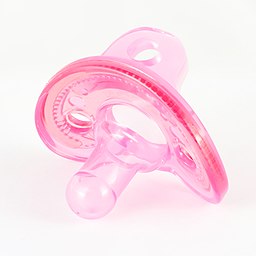 Recently the American College of Allergy, Asthma, and Immunology has discovered benefits to a certain way of cleaning child pacifiers. A pacifier has traditionally been a plastic or rubber substitute used to calm babies. Previously, scientists and pediatricians recommended sterilizing pacifiers or even hand washing them to effectively clean them. However, at a recent American College of Allergy, Asthma, and Immunology Annual Science (ACAAI) Meeting, an alternative method of cleaning pacifiers was discussed.

Over the course of 18 months, 58% of the 128 mothers that used pacifiers were closely followed on their method of cleaning pacifiers and also had their babiesâ IgE levels monitored. IgE is a type of antibody that is released to fight against allergic reactions in the body. Higher IgE levels lead to higher possibilities of having allergies and allergic asthma. The results of the experiment revealed something strange about pacifier cleaning. They found that parental pacifier sucking was linked to suppressed IgE levels in the first 18 months. It is important to note that in the experiment, 42% of mothers sterilized their pacifiers, 72% resorted to hand washing the pacifiers, and a mere 12% were sucking on the pacifiers. Not only this but 18% of the mothers had a family history with asthma, and an additional 8% had a family history of eczema.

Despite these results, allergist MD, Edward Zoratti still claims that there is no specific factor that might have contributed to these results. Dr. Zoratti (along with other scientists) believe that this may be due to the transfer of health-promoting- microbes from the parentâs mouth. However, he mentions that this is still unclear and that the IgE levels were not monitored after 18 months, so the effects are not known to continue into later years of the children’sâ lives.

There are other explanations for these results according to Dr. Abou Jaoude. It is known in the science world that early exposure to certain microorganisms stimulates the development of the immune system. This early growth plays a crucial role in protecting against allergic diseases later in life. This experiment highlights how parental pacifier sucking is a method of parental transferring of healthy microorganisms to their children. Dr. Abou Jaoude warns that this experiment just focuses on the association between parents who suck on pacifiers and lower IgE levels in children, not to misinterpret that pacifier use leads to lower IgE levels in children.

This isnât the only study that has come forward with news like this. Research has suggested that children born near livestock, avoid dishwashers, and born traditionally (not a C-section), all generally have lower IgE levels, and lower risk for allergies, proving exposure to micro-organisms is indeed beneficial. All scientists do mention that there are many environmental factors present in experiments like these, making it near impossible to pinpoint one specific factor that directly impacted the results.

It can be concluded that until further research is done, and direct correlations are seen, pacifier sucking will remain an alternative. Until then, mothers can keep on sterilizing and hand washing their babiesâ pacifiers, or if they please, suck on it themselves too!

This entry was written by Aakanksha H. and tagged Bio-Blogging. Bookmark the permalink.